According to the European directive, waste is defined as “any substance or object the holder discards, wants to get rid of, or is required to dispose of it.” The average Slovak produces 330 kg of waste per year, with only 8% recycled. The residue ends either in landfills or in a incinerator plant. At least officially. But just get out of your house and see how much of it ends up on the sidewalks, in the bushes or in the rivers and forests. 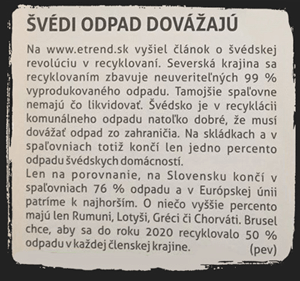 But it doesn’t have to be like that. We do care where we live. We are active people and runners in a same time. We are accustomed for long-distance tracks and often get to the remote places that charge us with energy with their beauty. However this is not the case always – and the reason is a man. Many times we are stunned because of what human is capable of. We find scrapped waste at the edge of a forest just because of a few € that somebody is not willing to pay at a public landfill. In Tatras we collect garbage from “tourists” between rocks. We collect beer cans in forest thrown away by mushroom-pickers, etc. And we are not talking about a few dozen of citizens behaving like this – we have seen hundreds of thousands of rubbish. Don‘t you believe? Just go to the woods after a mushroom season. 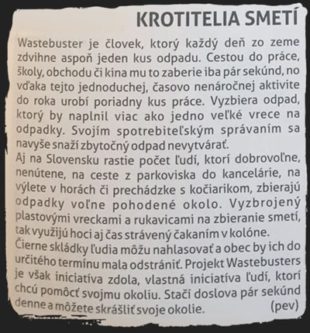 There are many examples of incongruous citizens but instead of just pointing at the problem we decided to act. We are aware of a fact that the change has to come from each one of us. That is why we decided to start our own initiative and inspire others.

Places we have to clean up are different every time. Sometimes there is a predominance of textiles, sometimes tires or electronics. Somewhere we have to collect building waste, carpets or even car battery. However the “classics” are plastics and glass – so dangerous for animals. From the labels we can say some of them were waiting for us for more than 40 years.

We have to realize that the number of garbage is still increasing and the nature will not tolerate it forever. It hurts us that the innocuous animals pay the highest price because of greed of man. We want to create a community of people who appreciate the environment in which they live.  We are also trying to reach our local authorities and local government representatives who can provide us some kind of sponsorship. We are very pleased that town of Svit heard our message and with their help we were able to attract 7 new “colleagues”. Thank you very much.

If there is a place in your neighborhood that deserves our attention or you want to join us – leave us a message!

You can get some inspiration from Mr. Rastislav Kruľ, who established Wastebusters.sk project in Slovakia driven by motto: At least one daily!

Figures 1 a 2 from author (pev) are from magazine TV Poprad – jesenný špeciál 2017. Thank you for publishing.