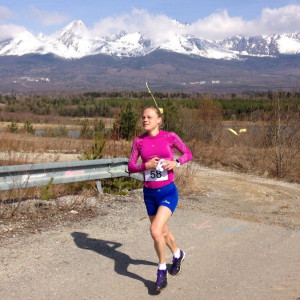 I do not write a review of races often, however the ALS Memoriál has left a deep emotional experience in me that I would like to share with you. Around two months ago my neighbor Martin Svočák first mentioned me he wants to organize a memorial of his father who died of an ugly disease called Amyotrophic lateral sclerosis (ALS) and at the same time to help a little girl Maria Kubova suffering from similar illness. I was excited immediately. This disease affects the muscular apparatus and all persons muscles starts to atrophy gradually with the brain remaining undamaged. The patient becomes a prisoner in his own body. I do not participate in charity runs often but I promised myself that if conditions allow me I will this time. Even one week before a race day I though I wont attend because of my study and race duties. Week after ALS race I should attend a Prague half-marathon. But suddenly everything changed – the school was canceled as well as my attendance in Prague and I had a free week in front of me. I think that exactly how it should be. I did not hesitate, found a share ride to Svit and HURRAY after two months to my beloved High Tatras region – my home – to my even more beloved family. Even in the car I did not know what a weekend was in front of me.

Friday I spent as usually by training with Juraj and all afternoon with my parents, whom I havent seen for ages. I finished the day with hot tub that I needed so much. On Saturday morning the sun was shining and I jumped from my bed, woke up Juraj to eat my favorite breakfast slumber “Ala Soňa” with me. Although my legs were solid as logs after Thursdays intervals I didnt care. That day I just wanted to enjoy it, run in training pace and with smile on my face. That was my highest priority after challenging winter – just to start enjoying running again. In addition my father – big athlete, my brother-in-law and my numerous “running family” from High Tatras planned to run with me. What to wish more?

The start was planned for 9am and so after memorialize Mr. Svočák we were ready for run. The challenging track of this Half-marathon starts with decent pace. First 11 kilometers were in slightly undulated terrain. We ran around “Bagrovisko” – a lake where I spent my summers bathing, then we passed trough a village of Batizovce and continued via beautiful meadows to village of Štôla – one of th emost beautiful places I know. A local citizens funclub was greeting us there. Afterwards my favorite walkway towards Podskalka where I heard my mommy in the distance – “Overtake a Polish!” – which I did not understand at that time (she explained me then the Polish man was the first and she was shouting this to all participants), Juraj made me some photos and I ran further. I was slowly earning my position and really enjoyed the race when my beloved hills showed up. I mean big hills – total elevation of 650m what is more than enough for a half-marathon race. First we had a climb to “Borik”, the hill where I grew up and spent many Saturdays and Sundays with my father. At the top I was in slightly melancholic mood. Exactly at this spot we were observing the nature around, eating a snack. Oh, how wonderful childhood I had…

The descent from Bôrik was something worse. The steep of the hill did not allow my legs to run freely, because I could injure myself by single bad step. At that point somebody overtook me for the first time but that did not bother me at all. Health is now at the first place. In my hometown Podskalka another group of supporters was waiting for me: “Soničkááá lets go!” came from all sides. I knew it was just a local race but I still felt like a world champion who is running with smile on her face. The flatland in Lopušná valley was meant as a relaxing passage befeore the worst (the best) part of the race – climb to Veľký Smolník. Not the first time for my legs – I have been here hundred, maybe two hundred times. Turn left, turn right, little bit straight and lets do this! I can imagine every stone and every tree on this road. After turning into forest I was surprised by a bumpy terrain which is not very common here. First time I have slipped and fell on the ground. Nothing happened – I continued uphills. Most of the people were already walking. My goal was to run whole ascent and avoid walking at all. One step after another I was climbing the Baba hill. I managed to get around two guys, encourage them a bit and continue up to the summit of Veľký Smolník. Afterwards there was an intensive descent which I run probably too carefully. “Just a few more meters” I wa teling to myself and also to another runner. “You are Soňa, right” ask the runner and cheered me up. At Malý Smolník I knew the rest of the track is only downhill. I remember as I climbed once this hill from the other side, grabbed the top pole and cried from fatigue and sadness that was inside me at that time. I was there alone only with my thoughts and God. Now I thank for all those periods which made me stronger. Even on that day I remembered those moments and this time with a smile I continued forward. There was another funclub cheering me, one last curve and the final alley full of my friends, and my family – my sister with her daughter, my mom and Juraj. In the end I was totally cool. I got a beautiful wooden carved medal, apple, drink, tea and even a donut.

A few minutes later my father and my brother-in-law arrived. We drank a coffee and just then the weight of the situation reached me. Only later I did realize the different emotions I had on that day. It was pure happiness, joy, melancholy and especially love. Love to the region I came from, the love for my family, for Juraj and especially the love for God. Today it was not essential the time, pace or hearth-rate – today it was just that I enjoyed every single second, my body was happy. Run for fun therapy in experience. The great thing is that it was not a purely selfish matter. I did not bring joy and happiness only to myself alone but also to the people around me (at least I hope) the family of Mr. Svočák and especially the little Maria, who is going to benefit from our starting fee.

The fact that I won the race was only a bonus that brought me a wonderful hand-engraved ostrich egg in a wooden case, a juicer and a thermo-cup that suits every student. The atmosphere was once again so amazing and pleasant that we even did not want to go home. However I felt hungry and I went home for my favorite cauliflower soup and the bowl full of nuts which give me energy and minerals after every race. That evening it was a purely family atmosphere, a sauna and of course family. When I closed my eyes on Saturday I knew I would fall asleep in seconds. It was not because of fatigue but by a beautiful warm feeling close to the hearth.

My dear readers, we respect the people, the environment and the moments that life brings us. Whether we are up or down, we will try to enjoy every second and every day having a Sunday full of love and smiles.  I also had tough moments last February/March because of my own stupidity. Nevertheless I tried to fight it sporty and tried to learn from my own mistakes. But now I am looking forward going back tot he top where I can see the sun. 🙂 Be nice and do not forget that it is all about the way we look at things and life!

We thank Sona for the nice article. We wish her a lot of health to be able to do what she really likes most and to continue enjoying her life with all her heart.