Our daughter was born on 4.2.2015. The first months of Mary’s childhood took place without any serious complication and as expected she began to spin, then sit and later crawl. We were delighted to have such a smart child. We started to think about an another one, which we actually had and we were full of expectations.

Approximately in the 8th month one day during crawling Maria fell down and no strength to stood up. That was a warning signal for us so we consulted it with our podiatrist. In her opinion was Maria healthy, just not eating enough and therefore she is weak. We also stayed in a hospital’s children’s ward. They found out nothing new and the eating did not improved. Days were passing and Maria had more and more of these accidents. After 12th month we asked initiatively for an examination at our neurological clinic. Hospitalization was immediately planned for further investigations. Again nothing unusual but at the last day the child neurologist ordered us for a specialized examination in Bratislava.

On May 27, 2016 our son Matej was born. After so many worries about the health of our Maria, we were happy again.

We got trough examination in Bratislava on June 17, 2016 – EMG scan and blood samples for genetic tests. Waiting for the results seemed like eternity. By the beginning of August 2016 we learned overwhelming and incomprehensible news that our daughter Maria was diagnosed a rare genetic disease – spinal muscular atrophy (SMA) that is currently incurable.

We are all at sea, doctors cannot guide us properly, we practice, rehabilitate, work hard to find information on how to improve the quality of life in this disease and hopefully we can at least partly reverse the poor prognosis of this illness. Our only strength and energy is the love of our children, the faith, the hope and the good people surrounding us and helping us according their possibilities.

As you can see, Mary is a wonderful child. Unfortunately, fate has already brought very difficult obstacles in front of her, which, with poor support from the insurance company, become a daily nightmare for parents. However, I believe that even with the help of our contribution, at least partly, we will make it easier for the family.

Mária is now rehabilitating in Poprad Hospital. As it is not enough, parents started to visit to Falck (private company) for exercises from their own resources (7,5 € / 0,5 hour). They also attended a center for handicapped children in Prešov – Svetielko, which cost for 5 days – 250 € (only for exercises, accommodation not included).

Rehabilitation exercises give Mary the hope to be at least partially independent. However, it is also necessary to provide medical and compensatory aids for which the insurance company either does not contribute at all, or just smaller amounts. The prices of some medical aids are extremely high. 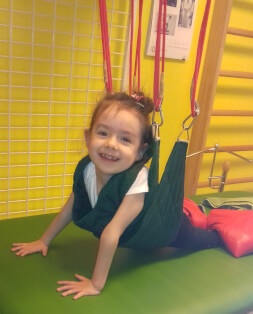 During last year many things happened at us and are still happening. We have been twice in specialized centre Adeli (March and May 2018). In May a special cure for Marias disease was approved and since 2 of August it is categorized. Finally, we got it on 31.10. We already consumed 4 doses of this cure and in May we are waiting for the fifth one. Afterwards classification of Marias health condition will take place and it will be decided if she gets more of it. First couple of doses were hard to withstand for Maria but the last one was without complication. During summer Maria had to go to the hospital because of some intestinal flu. I was half a year on parental leave because we had to build entry and bathroom with access for disabled at our house. 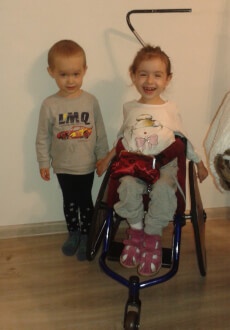 Now we try to intensify exercising with Maria – at home and during intensive private rehabilitations in Poprad. Her health condition is stable now and we are moving forward very slowly. She is gaining some abilities which she already had before, but she lost them. We hope and pray that she can stand on her own feet one day.

We started to look for new wheelchair for Maria because the one she has is only for interior and we would like her to visit kindergarten with brother Matej. We hope to succeed.

One we have hard time fighting with flu. Matej was at the hospital and today they had to go together with mum again. They must stay there for couple of nights. Till now Maria is fine and we hope it will stay that way. 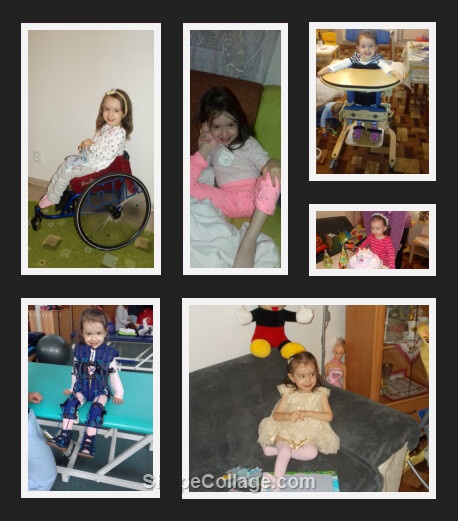