At my FB site or Instagram you may have noticed that I invited you to a great event, which is a charity run called „Ján Svočák Memorial“ or „ALS BEH“. This was already the second year, and the motto of the run is: „We are breathing and helping the ones whose own muscles have left them.“ Race is aimed at helping people suffering from ALS, a type of muscular atrophy involving the loss of central nervous system (brain and spinal motoneuron) cells that control the consciousness muscular movements. The patient cannot control his movements and gradually dull all his muscles in the body. However, the brain continues to work, and in full consciousness of mental abilities, the patient remains paralyzed. The most notable person suffering from this disease was Stephen Hawking, the genius who recently left us. Run is also a reminder of the organizer’s father, who was a passionate athlete and also suffered from this disease. This year, thanks to the race, three young people were helped by the same amount of money, which was collected from start-ups, sponsorship donations, on-site contributions, and a collection of plastic bottle tops.

I participated in this event last year and therefore I did not hesitate this year.

We went to race with Lenka, but I was the only one running since it is a cross half marathon, which is a rather demanding discipline. Already on Friday we went to my parents in Podolín, from where we were closer to the race. Mommy prepared a great dinner, but we could not finish it because of the already full stomach … sorry mom

We woke up around 6:20 on Saturday, had breakfast and drove to Svit where the start was located. Race started at 9 o’clock but registration and start-number pick-up was possible until 8:30. My number this year was 236, which I attached to my shirt, which I currently wear on every run. Registration was quick, without any problems. Before the start, I have also handed out 12 prizes from www.ostoreshop.sk, which I created for the ODLO sports shop where I work alongside the trainers activities, which became one of the sponsors of the event. Since we had a car heated and outdoor was a little bit cold, I started preparing myself and Lenka was warming up in a car. Before that, I went to hand out the collected plastic caps that I got. Of course my plastic bag tore apart and I had to pick up the caps again. During picking up one of the racers made fun of me asking if I am gathering the last ones from the ground quickly and Lenka had fun from me in the car – not really willing to help me

Compared with the previous year the track was the same but in opposite direction what we already knew. So we also knew that there will be a lot of hill at the beginning, then more or less straight ground. That’s why I was not in hurry at all.

The first hill was also known from the Spartan Race, which was held there two years ago. I already stood up at the start with my thighs and bumps hurting what was the result of a quarter training … I did not expect that. The hills went well, for a bit of unscratched calves it was a challenge, but they recovered very fast. The downhill went also well, despite the slippery surface, I managed them quickly. Maybe I should have slow down a bit, because the second half of the race was hard for me. At the first refreshment, I was quite pleased that I was breathing, drawing up the strength of brutal wide refreshment choices and water. I took a banana, an orange I had been looking forward to since the start, raisins, magnesium and passed on.

The second half as I said was very difficult, the energy was low, the result of exhaustion, the hard legs from training and my preparation units did not last longer than 10km, which is a mistake and I have to reassess my trainings. On the way to the finish, I ran some time with a mistress / aunt, with whom I spoke a few words about run, running in general, about hanging medals, and so on. She was 50 years old, but after about 10-15 minutes I had to let her go because her pace was faster than mine. Also the elders who were overtaking me from time to time were frustrating and motivating for me at the same time, as at their age they can be faster than me. Regardless of how much they have already run in their life.

The second refreshment, once again amazing encouraging people, incredible variety of food and drinks and one of the young people for whom this run took place was there also. I greet the young boy on a track that encouraged us and went on. Then there was a crisis when I could not even scurry and so I walked/ran. A frustrating moment again … At the end of the race, I was overtaken by the babe who had encouraged me and dragged me till finish line. The pace was murderous, but my time would be even worse and feelings from running also, for which I thank her. Before the end I was found by Lenka, who encouraged me, I gave her a kiss (supporters standing beside her were pointing to the left to which I did not respond and went straight to her) and so I passed the finish line. Finish, the handover of the chip (I do not know why I felt like we are keeping it, a really nice bracelet it was) and a medal that changed the color and ribbon comparing to last year. Wood medal is exceptional.

Again incredible refreshment from donuts, bread with “nutela”, oranges, tea, coffee, cola, water magnesium, bananas, everything possible, thumbs up. The finish time 2:37, for 22km 600m ascendance, which is not perfect but a bottom line for me. Lunch included in registration fee, changing rooms, warm shower (however I had icy, because last month I harden) were simply TOP. After the shower I had to put running shorts, because I left my jeans in the car.

After the race we went with Lenka to Max shopping mall in Poprad, where our mom, father and little brother were waiting for us. We had a little shopping session, I bought a great longline t-shirt and sweatshirt, and Lenka bought new jeans and brutal jersey shorts; I’m looking forward to summer … and went to lunch. We went to a self-service restaurant where I picked, besides meat, rice and vegetables, two pasta dumplings and fruit-carrot fresh salad.

Finally, I want to praise the whole race, the organizers for great action, the people for the unforgettable atmosphere and my closest ones for a beautiful day. One can think during such actions about those who are not fortunate and blessed to be healthy, have the opportunity to move and do what they enjoy, which is filled with happiness. But you should never give up, you do never mourn yourself, luck comes out of what we do regardless of obstacles 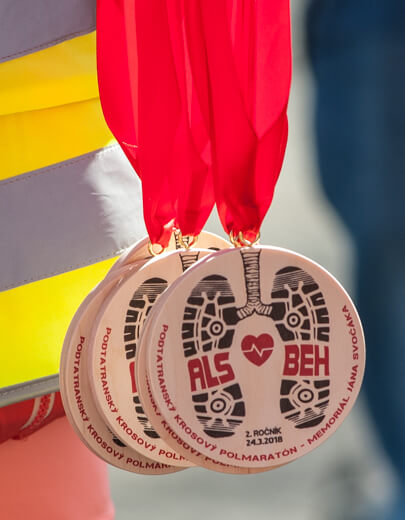 Thank you for your participation! We appreciate the runners who are also willing to travel from around Slovakia for our event. We wish you a lot of health so we can meet again next year!

More info about Jakub Gurka – personal trainer – can be found at www.jakubgurka.sk