March 8, 1996 – one of the most beautiful days in a life of parents. Our first son Radko was born. He weighed 4200g and was 59cm tall. We couldn’t wait to bring Radko home and to live as a real family. But during third day he got high fewer. Diagnosis was cerebral infestation. We believed Radko wont surrender without a fight. Twenty days later we were leaving the maternity clinic healthy, happy and a little stronger. Few days later we went to a compulsory vaccination and the story started again – 2 weeks of high fewer. Blood sample showed increased liver tests so we went trough several different examinations but everything seemed to be all right. “Radko will grow out from it” a sentence that was repeated continuously.  We were worried so we kept doing blood sampling every 2 months and the results were getting worse all the time. We realized nobody will help us in Trebišov so our doctor send us to Košice hospital. We were hospitalized there 3 times, always examined by another doctor with another diagnosis. Non of them was the right one. We couldn’t understand that nobody knows whats wrong with our son and we were desperate. No treatment was ordered so I called to Bratislava. 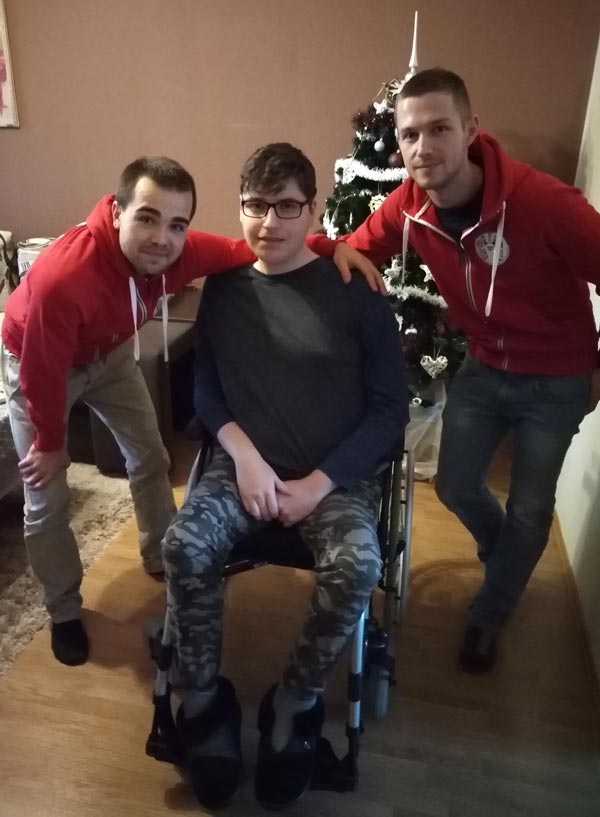 I contacted a chief of Medicine there,  who recommended me one specialist in Košice. We were very surprised  because we thought we already know every doctor there. We went trough the same procedures as blood samples, etc. The next day we had a phone call that the results arrived and we should immediately come as they were bad. After a week of another examinations including a liver or a muscle biopsy we went home with the worst  dispatch – “It looks like a muscle disease and your son will stay in the wheelchair from age of 8 or 10.” Of course we did not want to believe it and we still hoped that the diagnosis will never confirm. It was a few days before Christmas when they called us with results – unfortunately it was the truth – Muscular dystrophy. We just celebrated fourth Christmas with Radko.

Every year it was getting worse. When he was 7 he couldnt stood on his feed when he fell or could not walk upstairs. His legs were getting weaker and at age of 12 he couldnt suddenly get up from his bed.

Radko is 21 now and our hands and legs are substituting his own.